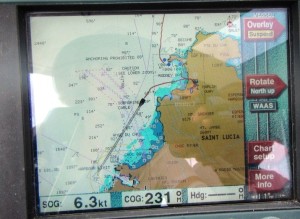 We left Martinique early in the morning, to make the passage to Rodney Bay, on St. Lucia.  There is a good anchorage and a large ICW marina, and a lagoon with mooring balls.  We planned not to stay in the anchorage because it is well known for noisy conditions, loud music, jet skis, and thefts.  We got a mooring in the 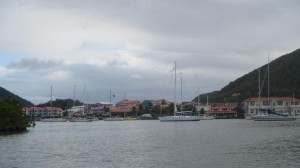 lagoon and settled in.  The following day we moved to a slip in the marina, which is very nice.

Rodney Bay is a good stop for provisioning, dining, and some touring.  There is a dinghy dock in the lagoon and its a short walk to an excellent grocery store and other shops.  You can buy spare parts at the marina store and hardware store and hire help if you need work on your boat.  But be prepared to 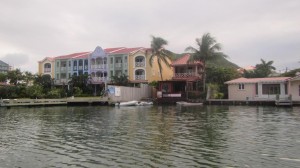 pay top dollar for any hired help.  We had to replace a raw water pump on our genset and needed help diagnosing an alternator problem, and we paid as much or more than we would have in Miami or Ft. Lauderdale.  First world prices, third world service.

We enjoyed our stay in the Marina and Customs and Immigration was in an office in the building next to the marina office.  Very easy to find.  Don’t expect to get in and out of immigration quickly since they are understaffed and busy.  You may be able to fill out your forms online using a system called E Clear but often the computer in the office is not working or the 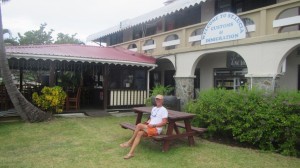 internet is down, in which case you just fill out the paper form.  As always, be sure you have all your boat documents, your crew list, and passports.  When we checked in, the medical officer (a nurse) was in her office downstairs so everyone also had to go see her to fill out a medical questionnaire and answer a few questions.  Aslo, before you leave the country, you must go back into the office and repeat the procedure, except for the medical exam.

There is a nice pool at the marina and some good casual restaurants so we went swimming and had a few meals out.  It was a nice stop.  The marina has excellent security but it is imperative that you not leave your dinghy unlocked either at the dinghy dock or on your boat.  Normal Caribbean procedures apply.

We left Rodney Bay after 3 nights.  We checked out with Immigration in the morning, and then had 24 hours to leave the country.  Our plan was 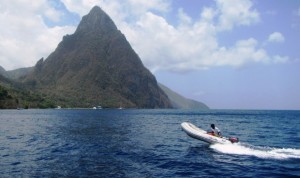 to sail south and stop at the St. Lucia town of Soufriere, near the famous Pitons Park.  There are moorings in the bay, managed by the Park Rangers so we felt it would be safe, even though we were aware of problems in that area.  It turned into a less than pleasant experience.

We arrived in Soufriere and were immediately met by a boat boy in a skiff who told us he would help us get a buoy.  We motored into the harbor and were immediately met by another boat boy in an inflatable who’s sole intent was to prevent us from tying up to a Park Ranger buoy and instead get us to rent a buoy owned by “a friend”.  We said no.  He then insisted that we tie up to a buoy he told us was what we wanted but it lacked the blue markings of the Park buoys.  We finally called the Park Ranger office and requested assistance.  Soon, a more official looking boat came from ashore and as it approached the boy in the inflatable took off.  We got tied to a buoy without trouble but then the inflatable reappeared and he demanded $10.00 as payment for his help.  We forcefully refused and he said our refusal was why bad things happen to people.  We again called the Park office and reported the incident.  She asked if we had a picture of his face.  Since we did not, she said there was little they could do but if we wanted to come ashore the Ranger would come and get us.  This was good, since our dinghy could remain locked to the davits and it would look like we were on board.  So we took them up on the taxi service.

The town may have been nice at one time but it has fallen on hard times.  There are many, many, many men (old and young) 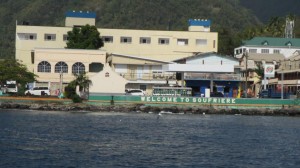 laying around on benches and sitting against trees, some of whom looked very much like drug zombies.  It was unsettling walking around town and being harassed for money. On a side street we walked past an open bar and a guy came out and asked if we wanted a town tour.  Of course, we refused.  Then he asked if we were from the ketch sailboat in the harbor.  Since the bar had no view of the water, this was a bit disturbing.  We went back to the Park office and asked for a ride back to our boat.  That night I slept in the cockpit, with a baseball bat, a loaded flare gun, and an air horn, hoping that I would not be forced to repel boarders during the night.  Needless to say, we left at first light.  We found out later that our experience was not unique.

The next stop was St. Vincent.  Our stop in Soufriere, although unpleasant, meant that our passage past the main island of St. Vincent would only be about 55nm.  We planned to go all the way to the island of Bequia because stopping on the main island 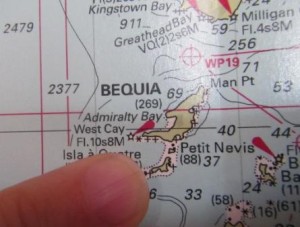 of St. Vincent is now considered dangerous and is un-advisable.  Recent crimes against cruisers include robberies, assaults, and even a couple murders.  It is best to simply cruise by and go all the way to Port Elizabeth on Bequia.  Bequia is part of the country of St. Vincent (as are the Grenadine islands) but it is much safer.  Crime on Bequia is more of the usual sort of Caribbean stuff, manageable if you stay aware and take precautions.

Port Elizabeth is a nice, protected harbor, with plenty of room and with shops and restaurants and locals selling jewelry and crafts at tables along the main road.  There are several dinghy docks along a paved waterfront walkway.  It is a very nice 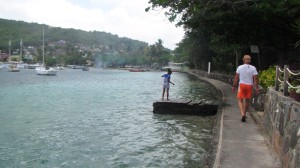 stopping point with a customs and immigration office that is efficient and friendly.  Many of the restaurants have free wifi and decent prices and there is an open air market for locally grown fruits and vegetables.  As always, be prepared to have prices start quite high with negotiations accepted.  The water is clean and we did some swimming and snorkeling.  We spent two nights there before hearing further south. 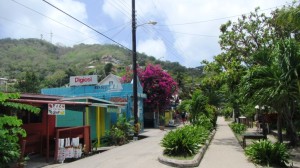 We left with some regrets and headed to the next island in the Grenadine chain, Canouan.  Bequia is a favorite with many cruisers and we stopped again on our trip north the following year.

Charlestown Bay on Canouan is a wide open bay with good shelter and a beautiful, expansive beach.  We anchored on the north side of the bay with easy access to the dinghy dock at the Tamarind Resort.  Its very pretty and it was nearly deserted.  There is a small town and we found a vegetable market but no one was very friendly toward us so we passed it by.  Back on the boat we were visited by some local guys who offered to sell us some fish.  We

were promised a large sea bass or snapper for $25.00 U.S. so we agreed and a couple hours later they returned with a “large” fish that would not even have qualified as a legal keeper in our State of Washington.  By the time it was cleaned and filleted there was just barely enough meat for dinner.  But we felt safer having not refused the offer and the fresh fish tasted great.  Since there was little to do ashore, we left the next day. 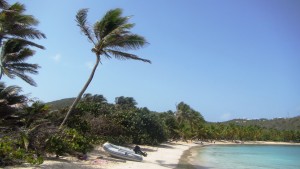 Our next stop was at Salt Whistle Bay on Mayreau island.  This is a beautiful spot, with a small harbor, a gorgeous beach and a short hike up a small hill to some great view points.  But the harbor is small and exposed to E NE winds so it was a tight fit to get anchored.  There was an abandoned resort with some nice cabins at one time but it was closed and the little houses were in disrepair and falling apart.  We went swimming and snorkeling for a bit but decided it was too windy for an overnight stay on the anchor so we left and sailed down to spacious Saline Bay.

Saline Bay is is a stopping spot for cruise ships and there is a large beach and water front park that sports lots of outside stands for food and tourist trinkets when the ship is in.  But during our stop there were no cruise ships so only one stand was open.  She was very friendly and we enjoyed walking around the park and to the salt lagoon on the landward side.  It was a good anchorage, with lots of rooms and good protection.  The water was nice and clean and we swam and snorkeled before departing the next day.

Next up, Part 9:  Union Island, the last of the St. Vincent Grenadines.